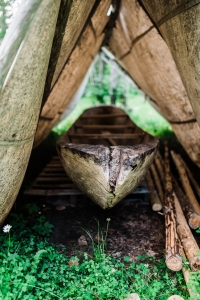 The Lheidli T’enneh Lhukw ba nits’unih (fish camp) at Huble Homestead is a reconstruction of a similar camp that was located approximately 2km up Lhtakoh (Fraser River) from where the historic site is today. The camp was a seasonal settlement that was occupied from mid-shen (summer) through early dak’et (fall) while the talukw (salmon) were running. At the fish camp, a group of people, mostly extended family, came to fish for salmon, gather roots and berries, hunt, and preserve food for colder months. The fish camp exhibit was created in partnership with the Lheidli T’enneh First Nation and is made up of several structures, including a smoke house, meat cache, canvas sleeping tent, a lean-to common area, and a drying rack. It also features a hand-carved cottonwood dugout ts’i (canoe), carved by late Lheidli T’enneh Elder Robert Frederick.

Traditionally, the Lheidli T’enneh and other Indigenous groups fished using methods including dip nets and fish weirs. Dip nets were used in large, fast running rivers such as the Fraser. Using a stand resting on the bank and stretching over the water, fishermen used dip nets to scoop fish out of the river and toss them ashore. Fish weirs – obstructions placed across part or all of a waterway – were used in smaller tributaries. They allowed for a selective fishing process, as gates in the weir could be opened to let fish swim through and closed when it was time to fish. Fishermen would stand on the weir and net the fish they needed while letting the remainder pass through. These methods allowed for careful monitoring and management of fish populations.

As settlement and colonization intensified in the late 1800s and early 1900s, Indigenous fishing practices were increasingly restricted in order to protect the emerging cannery industry. When fish traps and weirs were banned, it resulted in the fishing rights and technologies of the Lheidli T’enneh and other nations being increasingly restricted.

Lhukw ba nits’unih is a seasonal exhibit, in place during summer months only.