In November 1909, Albert Huble and Edward Seebach left Huble Homestead for Fort George to vote in the first provincial election held in the Cariboo District north of Quesnel. After three days snowshoeing from Giscome Portage, they arrived late in the afternoon on election day, November 25, only to be told that there were no more ballot papers available. Only 25 ballots had been sent; 24 had been used and one had been declared “spoiled” by the deputy returning officer.

Having spent three days trudging through snow and ice, Huble and Seebach declared that they were going to vote, “Papers or no papers!” They were permitted to vote on “tendered papers” – different paper than the regular ballots which may or may not be taken into the count by election officials at a later time.

This story was part of a front page article published in the Fort George Tribune which declared that Fort George was making history with its first election. That there were “more voters than ballot papers was proof that Fort George was growing.” The story included the names of all 26 men who voted, the local results, and amusing anecdotes about what took place at the polling stations. They also reported that Seebach and Huble’s votes were indeed counted and the end result was that John A. Fraser, Conservative, was elected as the area’s first MLA. The article even speculates on why the one ballot was spoiled, attributing it to a staunch “Orangeman,” or Protestant, who desired to vote Conservative but balked at the fact that Fraser’s running mate was a devout Irish Catholic. Though it doesn’t name names, the article assumes the reader knows the identity of the voter in question, as it’s pretty hard to keep your vote secret when there are only 26 voters and everyone spends the day watching the event. 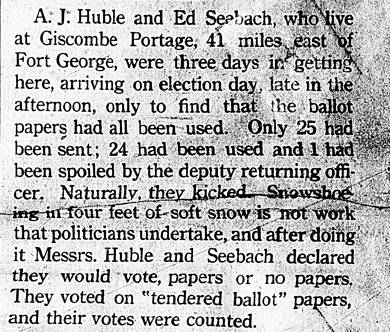 Artists of the Robson Valley
Scroll to top