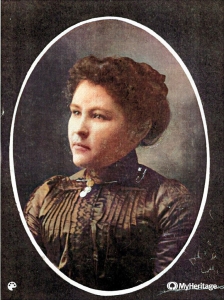 While Albert Huble may be who most people think of in connection with Huble Homestead, Annie Huble, its hardworking matriach, is an important  part of the Huble family legacy.

Ann (Annie) May Hart was born January 25, 1884 in Havelock, Ontario to Freeman Hart and Rebecca Jane Master.  At 17, Annie married William Copperthwaite, with whom she had three children. The marriage appears to have been short lived, as the couple had separated by 1910.

Annie met Albert Huble when he was visiting his family in Ontario over the Christmas holidays in 1910. Al mentions Annie in his diary for the first time on January 1, 1911 with the entry “Took Miss Hart for a drive & had an upset.” Family legend has it that it was on this sleigh ride that the couple decided to get engaged.  Several months later, Annie and her youngest daughter Ada moved across the country to British Columbia and settled with Al in his one room cabin at Giscome Portage.  Her older children were attending school by this time, and stayed in Ontario with their maternal grandparents to continue their studies. Annie and Al’s first child together was born at the homestead in October 1911. Al began work on a larger home to accommodate their growing family, and the one room cabin was eventually pulled up against the new house to be used as a summer kitchen. Over the next 20 years, Annie and Al went on to have six more children together, four of which were born at the homestead.

Annie was a vital part of the work at the homestead, growing a substantial garden of potatoes, turnips, cabbages and other vegetables to feed her family. She also kept a small flower garden to grow a variety of flowers and herbs for household use. When Al was away from Giscome Portage, Annie tended to the General Store. After the Huble family moved into Prince George in 1919, Annie often joined her husband on his trap line and on business trips.

Annie Huble passed away on December 1, 1949. She was remembered her fondly in her obituary as a woman “who not only had the reputation of being able to shoot as well as any man, but [who] also managed a trap line and several trading posts.”

Ceepee and the Fish Camp
Scroll to top